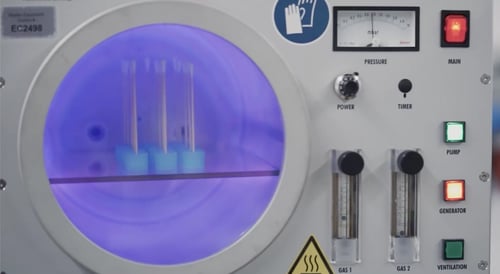 In electronics there are thin slices of semiconductor material called wafers. These semiconductor wafers are usually made by etching silicon and are widely used in the production of integrated circuits and various other microelectromechanical systems (MEMS). These parts are essential in almost all modern technology including computers, cell phones, and all other digital home devices.

Si etching in general and silicon wafers in particular is one of the most widespread and best-understood etching processes. Usually, the etching is performed by a working gas or gas mixture, which contains fluorine atoms. Sometimes also noble gases such as xenon or argon are added. Some popular plasma species for wafer etching are CF4, CCl4, SF6 XeF2, or radicals like CF3 or CF2.

The reason for this common usage of fluorine components in the etching process is that this element reacts swiftly with silicon. This plasma etching process is even more rapid when reactive ion etching (RIE) is applied. In that technology, strong fluxes of highly energetic ions are directed toward the wafer surface. This increases the etch rates by up to an order of magnitude compared to just chemical etching.

For example, one argon ion with a kinetic energy of 1 keV can remove up to 25 silicon atoms from the wafer surface. These high etch rates are partly achieved by sputtering and partly because the fluorine atoms chemically bind to the surface atoms and vaporize. The removal of the top layers of the substrate either occurs via isotropic etching (e. g. as it happens in wet chemical processes) or via anisotropic etching which can be achieved through plasma and RIE.

Another common type of etchant is Cl. If chlorine is used for silicon wafer etching, the etch rates are negligible at room temperature and, in general, lower than for fluorine. This can be an advantage when it comes to selectivity. For example, masks on a silicon surface will be etched by chlorine while the Si surface is left intact. Another important aspect of chlorine and fluorine is the so-called doping effect. This effect leads to a higher etch rate for n-type silicon than for p-type silicon wafers. Depending on the aim of the process, this can either be a bug or a feature, which has to be kept in mind.

Plasma etching silicon wafers is a crucial step in the production process for integrated circuits that need to be very small and thin in size. Trying to create the patterns necessary on the surface of these minuscule devices is difficult without damaging them but with the help ofplasma technology etching siliconwafers can be done very effectively.


How Etching Silicon is Done

When etching silicon for the production of integrated circuits, Thierry uses a process called reactive ion etching or RIE. This process is a different form of plasma etching that combines chemically active plasma such as XeF2 with particles that produce more physical energy like argon plasma. Etching silicon requires a more vigorous approach and RIE can accomplish this task and carve out the necessary micro-structure in the silicon wafers that will be used to make the integrated circuits.

Silicon nitride or Si3N4 is also commonly etched with fluorine-containing plasma. One of the biggest advantages is that fluorine has a very good selectivity, even at room temperature. This means that the plasma predominantly etches the silicon at the surfaces rather than dopants, for example.

The same holds for silicon oxides and similar materials. It is important to etch Si3N4 selectively because it is used as a dielectric material for semiconductors. Silicon nitride can also be utilized as a masking material for the selective oxidation of pure silicon.

After the oxidation process, the silicon nitride layer often has to be removed via etching. If conventional dry etching is employed, the etching itself is isotropic, comparable to wet etching processes.

The latter has the drawback that it is they are highly isotropic and the etching chemicals can even undercut applied etching masks.

However, in plasma, electric fields can be applied to achieve anisotropic etching. These fields accelerate energetic ions toward the surface. These ions are then able to etch practically only in one direction. The feedstock in plasma-assisted Si3N4 etching is normally some kind of fluorocarbon-containing gas. When Si3N4 is etched with plasma it has to be taken into account that the etch rate depends on how the silicon nitride layer was created. The etch rate is higher if the substrate was coated with a PECVD process than for PCV depositions.

Silicon dioxide, like other Si-containing compounds, is neatly etched by fluorine or carbon-fluorine-containing plasma. At room temperature typical etch rates are several dozens of nm/min. The reason is that SiO2 is much harder (about 40 times) to etch than pure silicon. For this reason, the best way to go is RIE, as it is used in the system by Thierry Corp.

If the ion energy is around 500 eV, or even higher, the etching becomes mostly anisotropic and the etch rate surpasses 200 nm/min. If a carbon-fluorine compound like CF4 is used in the process, one can achieve great selectivity of SiO2 compared to Si. The main disadvantage of fluorocarbon etching is the unwanted deposition that can occur parallel to the etching process.